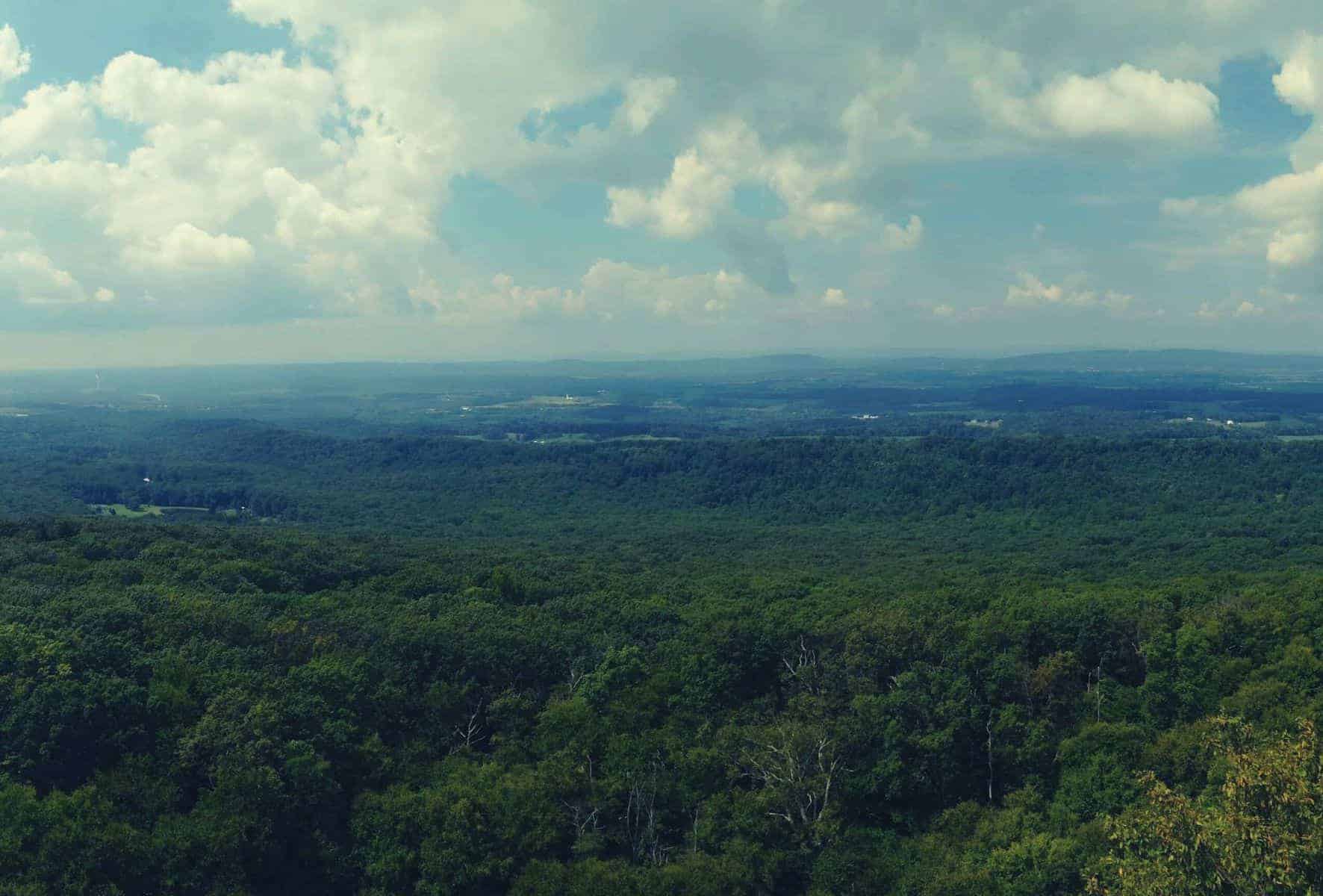 For those in the Washington D.C or Baltimore area, Maryland’s Sugarloaf Mountain offers an easy, family-friendly half-day hike that packs a surprising amount of natural eye-candy (see video below!) into a short network of trails.

You’re unlikely to return home with tales of daring and derring-do, but if you happen to have an afternoon to burn or are seeking a pleasant hike in a leafy, scenic retreat that feels a million miles away from the noise and annoyances of the city, Sugarloaf offers just about the ideal getaway.

Below, we’re going to run you through the need-to-know for hiking on and around Sugarloaf Mountain, from a few handy gear tips right through to trail options and what you can expect to find on your hike.

Sugarloaf Mountain is a small outlier of the Appalachian Mountains that pokes out of the Maryland Piedmont just high enough to offer incredible views of the surrounding terrain. Although a mere geographical blip compared to its towering neighbors to the southwest, it nonetheless boasts enough historical, geological, and ecological intrigue to make it more than just a nice spot for a decent workout.

RELATED READING: Check out our main page for more hiking in Maryland inspiration.

In geological parlance, Sugarloaf Mountain is what is known as a ‘monadnock’ — a peak that stands in isolation as a result of withstanding the forces of erosion that have leveled the rest of the surrounding terrain. Sugarloaf’s prominence of 800 feet above the Piedmont Plateau not only makes it a prime lookout over the plains below, but also lends its predominantly quartzite upper portions a more imposing profile than its modest height of 1282 feet would allow elsewhere.

Sugarloaf acquired its name on account of the resemblance early hunters and pioneers thought it bore to the conical sugar cakes used to sweeten food and drink (i.e ‘sugar loaves’) back at the time of early European settlement.

Over the years, the mountain has played a small role in various conflicts, including the French and Indian Wars, and then in the American Civil War, during which it passed between Northern and Southern forces numerous times and was used as an observation and signal station throughout the Maryland Campaign. Soldiers wounded during these battles were treated in a log cabin that still stands at the foot of the mountain to this day.

In the early 20th century, Chicago businessman Gordon Strong bought both the mountain itself and much of the surrounding terrain. (Today, the total clout of the Strong family stands at a small-country-sized 3,200 acres.) Strong subsequently enlisted the services of Frank Lloyd Wright to create a drive-in lookout for automobiles on the summit, but the famed architect — gladly — finally let good sense intervene and the project never came to fruition.

Another flirtation with fame occurred when President Franklin D. Roosevelt contemplated using Sugarloaf Mountain as the site of his presidential retreat. Ultimately, Roosevelt was dissuaded by Strong and instead opted for a spot on nearby Catoctin Mountain, where he was to build what we now know as Camp David.

In 1947, Strong set up a trust to maintain the trail system and facilities at Sugarloaf Mountain, and to this day the trust stands as a rare of example of harmonious and effective private ownership of an area of natural beauty and public interest. The area was designated a National Natural Landmark in 1969.

Sugarloaf is famed for its abundance of tree and wildflower species, with over 500 species of plants gracing its gently sloping flanks. The most prevalent tree species on the mountain are red and white oak, black gum, tulip poplar, black birch, and eastern hemlock. The mountain’s wildflowers, which are most in evidence during warmer months, include lady slipper orchids, the pinxter flower, rattlesnake weed, wild violets, and bowman’s root.

Pro Tip: Watch Out for Rattlesnakes

During your hike on Sugarloaf, you might be lucky enough to encounter any of a number of mammals, birds, and invertebrates. The most notable and common of these include whitetail deer, flying squirrels, red foxes, eastern cottontails, raccoons, great horned owls, pileated woodpeckers, wild turkeys, red-shouldered hawks (see below!), rattlesnakes, and copperhead snakes.

Type of Trail and Trail Difficulty

A 5.8-mile, easy hiking loop on an established, waymarked route with 1,640ft of elevation gain.

The Sugarloaf Mountain loop (a variation of the Northern Peak Trail Loop) is doable year-round, but the optimal time for a visit is when all those wildflowers are in full bloom, usually from late April to early June. All of the trails in the mountain’s network are open daily, year-round, from sunrise to sunset (no permit required).

From the entrance to the park, continue on the access road, completing four switchbacks until reaching the trailhead at the East View parking lot just below the fifth.

No bus or shuttle service currently serves the trailhead.

From the parking area at East View, the trails starts off on a dusty and fairly steep incline for 0.3 miles on the orange-blazed trail until reaching an intersection with the red-blazed trail. From here, veer left for 100 yards to the summit of Sugarloaf Mountain. Returning due east, descend on the red trail for 0.3 miles to the intersection of the blue-blazed Northern Peak Trail and the McCormack Overlook.

From the White Rocks intersection, continue on the blue trail, descending a further 0.75 miles and then taking a left turn onto a wider mountain access road. From here, the trail takes a quick right, heading back into the forest before climbing gently for roughly 1 mile to another junction with the white trail. Turn right onto the blue-white trail and continue for just under half a mile to the West View parking area, avoiding the white trail that veers off to the right.

From the parking area, return to the trail’s starting point at the East View parking area by hiking downhill for 0.3 miles on the access road.

If you’re particularly short on time or are hiking with your kids, there are a number of abbreviated variants on Sugarloaf Mountain which still take in the best of what it has to offer. The most attractive of these is described below.

From the same trailhead as the longer loop (East View), follow the same trail (orange and then red) to the summit of Sugarloaf Mountain, and then descend on the green trail headed southwest. At the bottom of the green trail, turn right onto the blue trail and complete a loop back to the starting point around the base of the peak by way of the white trail. 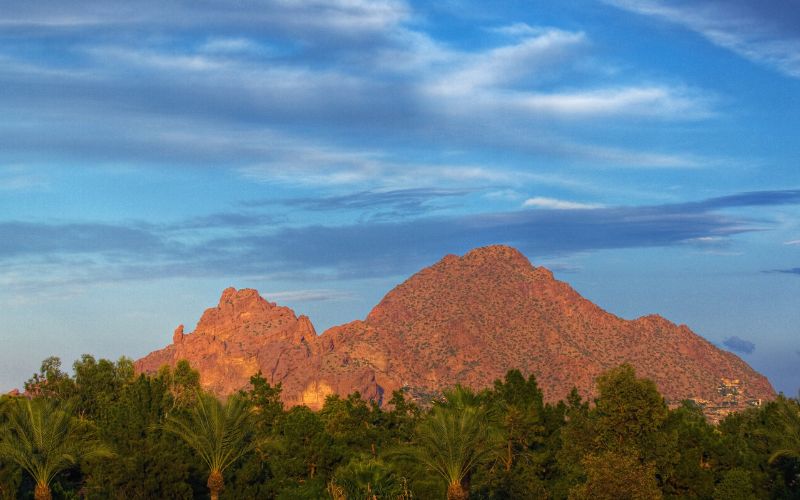 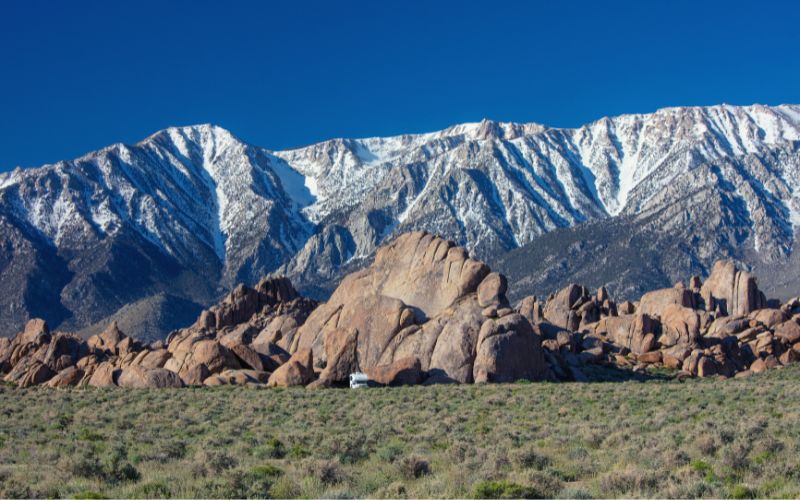 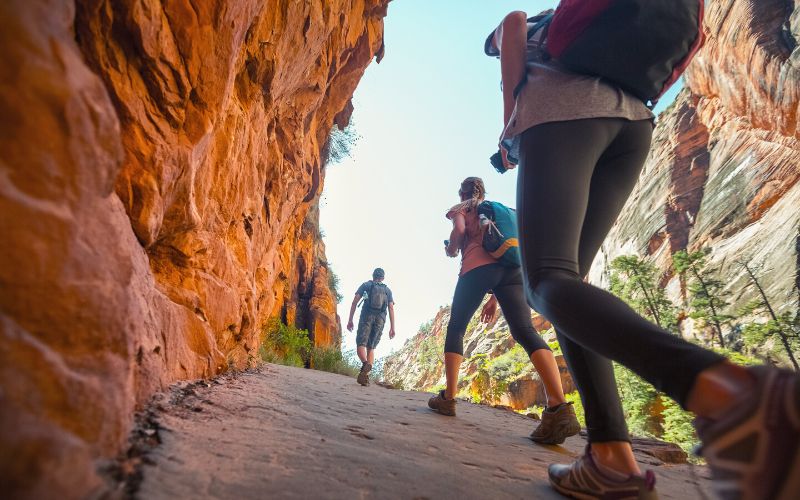